Reporters with the USA Today Network in Pennsylvania held a virtual town hall to answer questions about voting in the election Nov. 3.

Pennsylvania has a long history of being consequential in presidential elections — choosing 20 of the last 25 presidents.

With 20 electoral votes up for grabs, it is considered by some analysts as the most important state in the 2020 presidential election.

It’s an opinion clearly shared by President Donald J. Trump and former Vice President Joe Biden, as they made a combined 10 campaign visits to Pennsylvania in September.

Trump hasn’t been here since late September, five days before the White House told the public he tested positive for COVID-19. Biden campaigned in Gettysburg on Tuesday.

More: In Gettysburg, Biden invokes Lincoln in call to heal the American soul

“The candidates have been virtually living here,” said Terry Madonna, a pollster and political analyst at Franklin & Marshall College in Lancaster. “That tells you how important Pennsylvania is.”

Former Vice President Joe Biden and President Donald Trump are on opposite sides of the vote-by-mail issue. (Photo: AP)

Five states in one

Winning in Pennsylvania is no small feat. It’s a geographically diverse and large area with more than 12 million people.

Drive two hours east from Pittsburgh or two hours west from Philadelphia, and it can easily feel like a different state — one with pastoral landscapes and more conservatives. Voters who live in the heartland of Pennsylvania have helped Republicans maintain party control of the state Senate since 1994 and the state House for the majority of the last 25 years. Gerrymandering has also helped.

Visit the northeast and southwest corners and you’ll find Pennsylvanians who come from a long line of blue-collar workers in the old coal and steel industries. Now, some of them are working in the oil and gas industry. Voters in these areas elected Democrats for decades and in the last 10 years gradually started to vote for Republicans. They are a big reason Trump won the state by 44,000 votes, or less than 1 percent, in 2016.

Pharmaceutical and technology companies are plentiful in the suburbs of Philadelphia and Pittsburgh, and health care jobs are abundant across the state. College-educated women in these areas helped propel a record number of women to state and federal legislative positions in the 2018 midterms. These voters are expected to play a big role in deciding the presidential election this year. 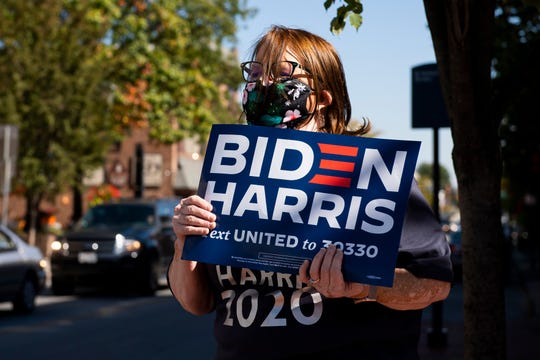 In the northwest corner, Erie has been a Democratic stronghold but was one of the counties that flipped to red four years ago. Erie is geographically unique in Pennsylvania with its shoreline along one of the Great Lakes, but it is politically similar to the northeast and southwest corners with its abundance of working-class voters.

The cities in Pennsylvania, including Philadelphia, Pittsburgh, Allentown, Harrisburg, Lancaster, York and more have reliably voted for Democrats. Those voters are seeping into the suburbs, even in southcentral Pennsylvania’s agriculture and manufacturing belt where Republicans typically outnumber Democrats. The GOP still has the registration advantage in a seven-county region that includes big names like Hershey’s, Utz and Harley-Davidson. But more voters are switching to the Democratic Party in southcentral Pennsylvania than the Republican Party, and it’s a statistic that really started to increase in 2019.

In some ways, Pennsylvania is a microcosm of the country, with its eastern and western borders holding the biggest population centers and a lot of industry and heartland in between. Political commentator James Carville once described the state as, “Philadelphia and Pittsburgh with Alabama in between.”

“Campaigns know if their messaging works here, it can probably work nationally,” said Jesse White, a political strategist at Perpetual Fortitude, a Democratic consulting and digital management firm. “To be able to come in here as a national campaign and have the resources and messaging to effectively win a state as diverse as Pennsylvania is real work.”

While state races and gubernatorial matches offer few surprises, presidential elections can be harder to predict.

The governor’s seat had regularly flipped between Republicans and Democrats every eight years until 2014 when Wolf defeated former Gov. Tom Corbett after the incumbent Republican’s first term.

The state tends to split its U.S. senators, sending one Democrat and one Republican to Washington, D.C.

But presidential races attract a much higher volume of voters than state races or midterms, and those voters have been known to choose candidates in the opposite party.

That certainly happened with Trump four years ago, when nearly 200,000 voters switched their registrations to Republican so they could cast their votes for the political newcomer in the 2016 Pennsylvania primary. Additionally, a hefty number of Democrats voted for Trump in the general election.

It was somewhat similar to what happened in the state during the 1980s. 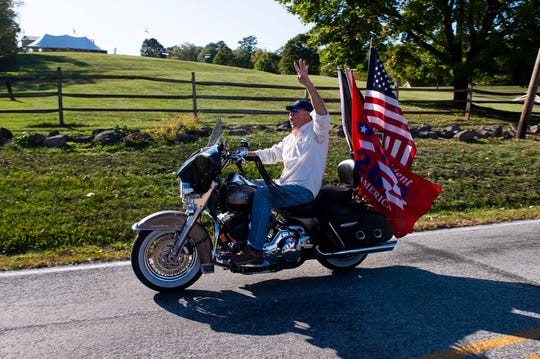 A passing motorcyclist holds up four fingers and yells, “Four more years,” as he drives down Camp Gettysburg Road near the Lodges at Gettysburg in Freedom Township on Oct. 6. (Photo: Dan Rainville, The Evening Sun )

Pennsylvania has always been a swing state, Lord said.

“Culturally, it’s who we are,” he said. “President Trump doesn’t have anything to do with this. It’s the culture of Pennsylvania. The U.S. Constitution was written here.”

More: U.S. congressmen from Pa. tested for COVID-19 after flying with Trump to Harrisburg rally

Democrats have also been able to attract Republican voters.

Former President Barack Obama had ripe conditions in 2008 as a change candidate after eight years of Republican President George W. Bush, who led the country into a recession.

Obama’s presidency seemed fated, but it was a close election in Pennsylvania until Election Day, when he ended up winning by 10 points — the largest margin since 1996.

“Pennsylvania has been fool’s gold many times,” said Charlie Gerow, a Republican strategist in Harrisburg. “Republicans came in every four years and thought they would win. McCain came in with a huge surge of activity in the last 10 days of 2008, trying to win the state.”

That didn’t happen, largely because Obama had a huge, insurmountable turnout of Democrats in cities across the state. But he also gained votes from McCain’s party that helped him win Republican strongholds, such as Berks, Pike and Wayne counties.

Democrats still have a registration advantage in the state, but it has eroded over time, falling from 4.4 million registered Democrats in 2008 to 4.1 million today. In that same time frame, the number of registered Republicans has increased from 3.2 million to 3.4 million.

Obama cut into Republican margins in places like Lancaster County, which Kerry lost by 32 points and Obama lost by 12 points.

Obama won Pennsylvania by 6 points in 2012, fending off Republican challenger Mitt Romney. But Romney won back Berks, Pike and Wayne counties, and Trump held onto them and flipped blue counties in 2016.

More than voting for Democrats or Republicans, Pennsylvanians tend to vote with their gut instincts, typically casting their ballots for the candidate they perceive to be more genuine.

“Pennsylvania is a state that chooses personality over political party,” White said.

This year, the Biden and Trump campaigns both think Pennsylvania is in play.

“Democrats don’t think Trump can win the election without Pennsylvania,” Gerow said. “I don’t think Biden wins without it. It’s the most important state in 2020.”

Pennsylvania is a winnable state for either party in any given election year, and it carries enough electoral votes to be a game-changer, analysts say.

‘Running out of time’: Efforts to speed up counting mail ballots stall in battleground states

“At the end of the day, it’s math, and the state’s 20 electoral votes are very intoxicating,” Gerow said. “Pennsylvania is the ultimate chess game.”

Unless the Electoral College changes, Pennsylvania’s importance in general elections is unlikely to change.

“Elections here have always been close,” Gerow said. “The state being up for grabs is a great thing for democracy. Pennsylvania is a true swing state, and it will be a swing state forever.”

Candy Woodall is a reporter for the USA Today Network. She can be reached at 717-480-1783 or on Twitter at @candynotcandace.

This coverage is only possible with support from our readers. Sign up today for a digital subscription.

It is tee time for YAIAA golfers | Sports activities

three issues to look at for